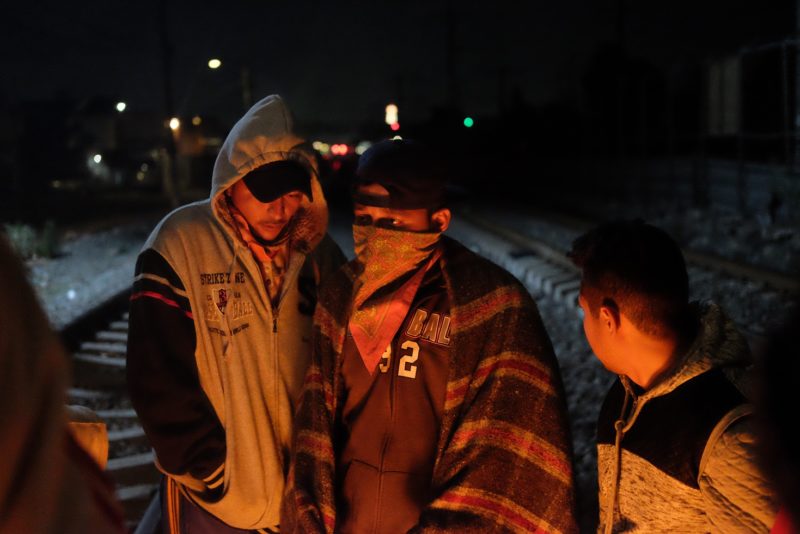 Pablo Allison is a multidisciplinary artist whose urge to express his ideas is stronger than his personal freedom, safety and social settlement.

It comes as no surprise then to observe that he comes from a graffiti background, whereby his love for drawing, taking photos, sketching big letters on public or private property and sharing fortunes with fellow travellers also have roots.

Migrantes valientes is a huge project that sums up all of this through a breath-taking journey into the hopes of people looking for a better life, which might be defined as: the dangerous and fascinating trip on the metal back of the beast that runs from Mexico to the more than 3500 km US border.

The set up you’re experiencing in this frame provided by Make Your Mark Gallery is a balanced mix of all the different media the artist utilises to tell a story of pride, struggle and courage, whose protagonists are Migrants and their communities built around an empathy that seems totally lost in our capitalist-driven existences.

Graffiti here is something different from what Allison practiced for years on the metal surfaces of the transit systems: in this project, that contains innumerable lettering interventions, the ego, usually represented by the author’s signature or the tag in this New York-born game, disappears in favour of the message.

It turns into a means of pure communication, while stylistic virtuosities disappear to maximize the legibility, a tool to talk about something other than oneself: migration, an issue that affects more and more people due to gang violence, wars, criminal liberal politics and climate change.

Photographs from the series La luz de la bestia are also included; this medium provides context and voice, dealing with stories of people fleeing from violence and economic misery and that too often just disappear down derelict alleys, along the train tracks or in the desert.

Last but not least, drawings and small objects complete the exhibition display. The first part, divided into portraits and sketches, are of exceptional importance since they bear witness as testifying evidence alongside the system’s failure to silence an artist who instead of bowing his head down, finds a way to transform dehumanizing repressive measures such as those scientifically implemented within ICE (Immigration and Customs Enforcement) detention, into an opportunity to create even more intense works: without access to a camera or spray paint, with a few pencils and some recycled paper, Pablo Allison was able to collect a series of extremely vivid records of his inmates and of the whole situation that they had to bear together. The latter are instead fragments of evidence of the lives of the Migrantes Valientes. Small but powerful things such as religious items, pictures, water bags and notes help the viewer to experience the same compassion captured within pictured souls which is the strongest drive for the artist.